Given the infrastructure of KUG’s Ligeti Hall, a special call for works has been issued for 2020 xCoAx edition. We sought contributions with a strong experimental and electroacoustic character that challenged common and established approaches to sound on multichannel setups, pieces that would engage in an exploratory mode pursuing the unexpected rather than relying on trodden paths.

Since the first edition of xCoAx, performances and exhibitions have been an integral part of the conference’s programme, essential in exposing the theoretical, practical and experimental approaches in the conference’s vast field of topics in a sensible and experienceable form. This year, xCoAx won’t be able to offer a physical place for this experience. Instead, the documentation materials should afford another kind of participation: not only providing information about the pieces and artists, but also, we hope, leading audiences to engage with them, although remotely. Discussions about their practical, theoretical, poetic aspects are highly encouraged.

Matters 5 is a fixed media composition, here in a version for 24 speakers. The piece formally consists of two parts that have been algorithmically generated with similar parameters of granular synthesis and different sound files (two short double bass samples). The scattered groups of grains – statistically distributed following combinatorial rules – have been processed by 24 reverb units with independent and partially extreme parameter changes. The intended room impression is one of surreality and blurring, corresponding to the formal development.

Polyharpye Reclaimed combines two parts: a complex sound world originally created for a large sculptural installation consisting of networks of ropes, and two new interfaces for playing it independently of that installation, thus reclaiming it. The sound world contains spatially mapped networks of complex resonators expecting polyphonic sound input. The MultiTouchPad interface generates synthetic source sounds by Ginger movement; the Polyharpye interface, a network of strings suspended in a dodecahedron, generates vibrational source sounds. As Polyharpye is designed for nontrivial, surprising behavior (by feedback and other meta-control strategies), I consider it an Xstrument, best explored in improvised performance.

The work is an immersive acousmatic piece that explores specific aspects of the unconscious that characterize the brief moment when we are about to fall asleep. Through sound spatialization, a multidimensional unconscious representation was created that evokes the relationship between psyche and body. The fast and involuntary body movements, hypnic jerks, that may occur at that time have been underlined. The work is a collaboration with the artists Elisabetta Porcinai and Alice Nardi, who wrote a poem for it, and it aims to find a balance between elegance and experimentation, femininity and masculinity.

Ring Study II/b is a live coding performance for 3D loudspeaker setups realized in SuperCollider. It consists of up to 64 discrete audio channels, each playing the output of a sine-oscillator, which follows the frequency from another channel (or itself). Using a Knot- and Graph-theory inspired approach, links and relinks between channels are performed to build up different knots, chains or rings, creating one or multiple feedback loops. The performance is a real-time interaction with the system, mainly by controlling the topologies of the signal-flow and exploring the resulting behavior in space. 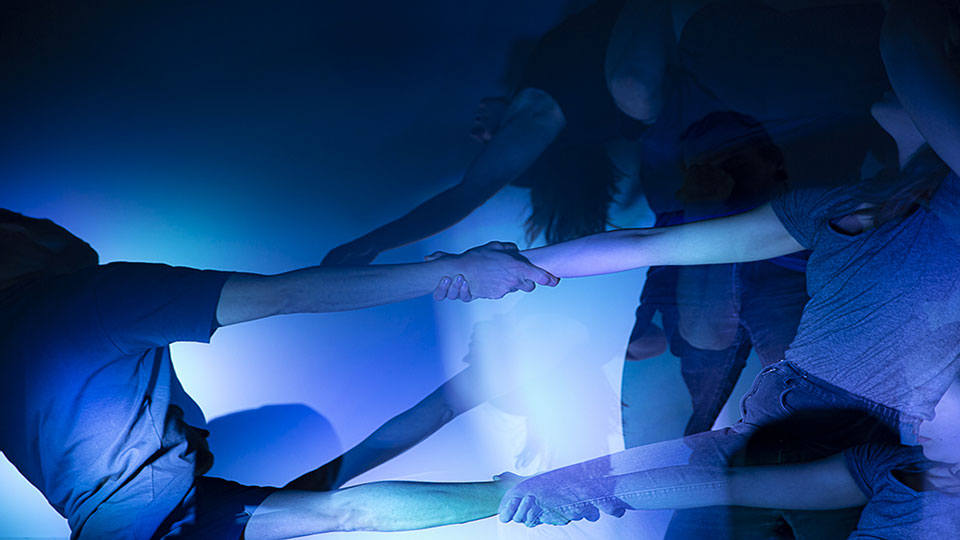 Naufrage is a 32-channel electroacoustic composition, constructed as a metaphor to the idea of a shipwreck where the audience are passengers cast away into a cave. The sonic landscape portrays their ideas of reality which gradually become distorted by their contemplation of images and shadows, relating to Plato’s Allegory of the cave. Their imagined perception is transposed sonically through a large variety of sound objects, their direction and movement through space. This brings up an immersive sonic image where spatial characteristics are the driving forces of the composition, aiming to convey high degrees of perceived envelopment, localization and motion.

Sparkline (with acceleration) is live electronic music with no fixed media elements. A long pair of wires producing sparks along their length in a somewhat regular but non-metrical and never repeating series of impulses is recorded with two condenser microphones. The recording is played back immediately while it is still being recorded. The playback begins at a rate roughly 8 octaves slower than recorded and steadily accelerates until it is roughly 7 octaves faster and almost catches the input. Sparkline (with serene velocity) is a video documentation of the piece and an homage to Ernie Gehr.